Okay just couldn't wait to point out this post at gaming age forums that shows us the following new stylus.

Best DS stylus ever, would I ever use it in public? No.
Japanese only? I'd bet my life on it, no way NoA would produce that...
Best E3 giveaway ever? You bet!


I'm a bad fan. :( Samantha put out a new album (evidently in October 2005) that I didn't know anything about. Angel with an Attitude was released by La Chapelle Records Canada last year. It's a import so I wouldn't have found it locally, but there used to be a time I was on top of everything Fox. :P For those of you who don't know who Samantha Fox is, shame on you!

BTW I got the album last week, I didn't really like the title track but after listening to the tracks (over and over) it's grown on me. I would give it 4 out of 4 stars (because its Sam), really enjoyed over half the tracks. Some of the album almost seems to be trancelike, and I'm so used to Sam tracks being dance/pop that some of the songs I'm still warming up to.


I've added an iPod addition list on the left side that will update the latest things I've sent to my iPod.

GDC tibits aplenty, and onto Oblivion.

The Game Developer's Conference was held this week, so there has been a surge of news (and lack of news on some topics). So here is some of the best...

Joystiq has up a little newsbit about the PS3 being region free (like the PSP) with the only regional coding being on movies. :) Nice.

The following shots are supposedly "real-time" renders from the upcoming Getaway game for the PS3. I will admit they do look sweet. 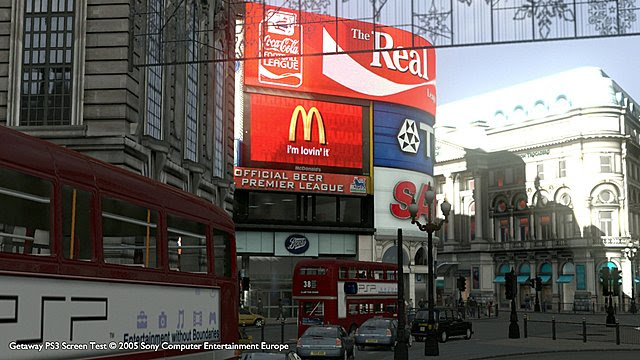 Check out Playsyde.com to download a CAM video of the PS3 God of War II trailer shown at GDC. Scroll down to the "Direct Download" section and choose a mirror. This looks absolutely awesome, and I didn't even play the first GoW.

Last but not least check out 1up.com article for a video download of the PS3 tech demos shown at the conference. Note: The page seems to have disappeared from 1up, so the link is actually the Google cache of the page. This means the videos may disappear without warning also. So you may just want to try the links below. :)


On the Nintendo front there was news, but not exactly what people were expecting. There was no DS Lite US launch date mentioned (if they can't satisfy Japanese demand, I don't see how they could make enough units to launch here). Although I've read they will still make the "old phat" DS dropping its price to $99.99, and selling the Lite for $149.99 alongside the original.

There was also speculation that the Revolution would get a new name, but that didn't happen either. Engadget has a little rumor up about a Japanese slide they got ahold of supposedly naming the system Nintendo Go?

There will be a Zelda game coming out for the DS! Yes indeed big N announced Zelda : Phantom Hourglass. Check out the video.


Finally, Elder Scrolls IV Oblivion came out (even with weather delays... don't ask) for the 360 and PC. I started the game out in the dungeon/sewers where you have to carry a torch to see anything, then I got outside where it was still dark. I thought geez I had seen pictures of this game, it looked a lot better. Well then daylight rolled around, and let me tell you the outdoor environments are beautiful! This has taken over my top spot currently for the best looking 360 game available right now.

Well this was a big week for Xbox 360 releases College Hoops 2k6, Ghost Recon Advanced Warfighter, and Burnout Revenge all made an appearance this week. I picked up Burnout Revenge, and I decided to try out Full Auto also even though the reviews have been mixed. So far I've played more Full Auto, but since it's only "rented" I don't have as long to play it as I will Burnout. It really is basically Burnout with weapons, and destructable environments. It looks gorgeous though in HD, and is a lot of fun in single player mode. I will post more about Burnout when I get a chance to play it a bit more.

The guys over at Dualscreenradio have put up another show in .mp3 format, that brings us up to episode 4.

The Yet Another DS Lite Comparison is this video that is a nice hands on comparing the DS Lite, and old DS (now referred to as the phat DS).

Posted by Edison at 9:53 PM No comments:

Well with the previous indication early in the week it came as no surprise that the DS Lite launch in Japan went well, and sold out quickly. Pick any of the major news sites and you can read about the launch, and check out pictures. Kotaku has posted a nice round up of all their Japanese launch coverage, and you can also check out some of the entries at DSFanboy.com.

Kotaku also posted a brief news item about a DS Lite kiosk they happened upon and the condition it was in. This was my biggest fear of the white unit. I realize that this is in a public area, and that people would probably not treat it like their own, but still. :(

Finally this Japanese web site put up some comparison pics between the new lite, and other units.

Posted by Edison at 9:21 AM No comments:

The Race is on! So much DS luvin' its CRAAAZZY!

Well last night my favorite TV show started up again, that's right Amazing Race #9 kicked off last night with 11 groups of 2. In the first 10 minutes I was easily going to root for David & Lori self-proclaimed "nerds' from Manhattan, KS but after about the second "give us a kiss" I was sick. :( I am now rooting for Tyler & BJ the "hippies" from California, I also like the Mother/Daughter team of Wanda & Desiree, but Mother/Son/Daughter teams never do very well.

Okay where to start with the DS info... The DS Lite is now available in Japan/Hong Kong although it seems like there is going to be more demand than product unfortunately. 4colorrebellion has a little article about the Japanese getting in line for a launch system. I hope this doesn't delay my import unit, I'm anxious to see how the launch pans out.

I found the DualScreen Radio site yesterday. They actually put out a DS themed internet radio show, and just recently put out the 3rd episode. I'm still listing to it right now as it clocks in at 3 hours+, but it is interesting and one of the better video game shows I've heard.

The Nintendo rep stated that they are releasing DS Download Stations this month here in the US (mentioned earlier on 2/10), but she didn't know yet where they would be located. I've read that GameStop/EBGames/Best Buy would be the likely candidates (although I can't see all of them getting the stations as some locations have all 3 clumped together). Evidently the Nintendo Store in NY has already set up their station and you can read about this guys hands on report.

On the last note I'm picking up Super Princess Peach for the DS.

I've still been playing quite a bit of Animal Crossing Wild World, and happy to report that the season's have changed and everything is green now. I've noticed some new plants growing in my town clovers, and Jacob's ladder flowers. This should also bring out some new fish, and bugs to catch! I finally finished my dinosaur exhibit at the museum so it's now complete, I'm soooo happy!

Posted by Edison at 6:53 PM No comments: